We have Man United tickets available for every match this season. We are proud to boast a selection of the best Man United ticket prices available in the world - allowing you see your most anticipated fixture or multiple matches at Old Trafford. This coupled with prime category seating scattered around all four sections of the ground.

Pick your spot inside one of the greatest stadiums ever built. Whether it be in the prestigious south stand or amongst the red army in the Stretford End, you will know why the electric atmosphere at Old Trafford is famous the world over with many more ticket options on sale.

Manchester United tickets are hot sellers and attract thousands of clients for every fixture and the demand for tickets is bigger than ever due to the announcement of Erik ten Hag as manager. Can his tennier as manager produce silverware for the Red Devils? Only time will tell how he progresses within each Manchester United match.

Watch the Red Devils for unbeatable prices and buy official match tickets after the games have sold out. Manchester United football tickets have always been in high demand but our exclusive network of contacts means that we can usually offer tickets to every game at Old Trafford via our trusted team of ticket suppliers. Ensuring that your only worry should be what the score is come full time.

If you haven’t had the chance to go to Old Trafford but would like to, don’t miss out. We sell Man Utd tickets for die-hard Man United fans, neutrals or those simply looking to enjoy themselves at one of the most important football stadiums in the world - partnered with viewing the highest level of English football. Regardless the reason, you can buy Man Utd tickets for a plethora of premier league games as well as all their matches in both cup and continental competitions.

We also sell Man Utd tickets for their away games, with seating in travelling fan sections for when the Red Devils are playing a reverse fixture. Be sure to capitalise on the exclusive range of United tickets that we sell - see if you can grab yourself a bargain with tickets occasionally selling below face value depending on the demand and availability.

Football Ticket Pad’s simply designed platform means in moments you can have your place secured in the Theatre of Dreams in a matter of clicks. All of our available matches and tickets can be found below with our trusted 24/7 customer service on hand to help you every step of the booking process. How will Manchester United perform during the 2022/23 season? Only time will tell, therefore, see how Erik Ten Hag’s side will perform live and in person as you buy Manchester United tickets with Football Ticket Pad today.

No need to worry - your tickets are guaranteed, no matter what.

We use high levels of data encryption here and do not share your data with any third party vendors!

Football Ticket Pad are proud to boast a selection of the best Man United tickets available in the world, with prime category seating scattered around all four sections of the ground.

If you have been to ‘The Theatre of Dreams’, which was famously branded by club legend, Bobby Charlton then you will know all about the world-famous atmosphere. Whether you have sat in the prestigious South Stand or amongst the red army in the Stratford End you will know why the electric atmosphere at Old Trafford is famous the world over.

The 75,000 seater stadium is steeped in history and is a sell-out every week. The Theatre of Dreams is a ‘must visit’ for any football supporter and we can cater for your needs at Football Ticket Pad with home, away and VIP hospitality tickets at Old Trafford for every game this season so you don’t miss a kick.

Away section seats are housed in the South East section of the ground and they are often quick to sell given the history and stature of Manchester United. Liverpool, Manchester City and Arsenal remain United’s biggest rivals and these are the tickets that every fan wants to get their hands on.

No trip to Old Trafford is complete without a visit to both the Sir Matt Busby and Sir Alex Ferguson statues. Both men are legends of the game and undoubtedly two of the greatest managers in football history.

The Sir Matt Busby Statue fronts the glass facade outside the East Stand on Sir Matt Busby Way. The clock and plaque in remembrance of the Munich Air Disaster are just as poignant and form a special place at The Theatre of Dreams. Sir Alex Ferguson also had his statue erected in 2012 outside the North Stand, which was renamed in honour of the great manager following his 25th anniversary in charge of the club.

There is currently talk of renovating the stadium so it can accommodate over 80,000 football fans - but we’ll keep you updated if there is any more news.

West Stand / Stretford End: The Stretford End is renowned for its famous atmosphere and United often attack in this direction during the second half of their matches. The Stretford End houses the most passionate supporters and it is here where fans can get a real taste of the passion that comes with supporting a club like Manchester United.

Sir Alex Ferguson Stand / North Stand: This stand is perfect for fans with MUFC tickets who want to watch the match amongst some of the most ardent United supporters. The three-tiered stand offers some of the best views in the stadium with an unrestricted view of the playing area.

Longside Upper and Longside Lower tickets offer customers the chance to sit in the Sir Alex Ferguson Stand and this is where Private Boxes and hospitality suites are located - including the Salford Suites and Manchester Suite.

East Stand: The East Stand holds almost 12,000 MUFC ticket holders and is located behind the goal opposite the Stretford End. The East Stand is also commonly known as the Scoreboard End because this is where the scoreboard used to be located.

There is also a large disabled section and part of the away section is hosted in the corner of the upper tier. Football Ticket Pad supplies Shortside Upper, Shortside Lower and Away Section tickets for this part of Old Trafford and fans can enjoy an unrestricted view of the action.

Outside of the stand is a plaque in remembrance of the victims of the Munich disaster, with the Munich Clock at the junction of the East Stand and South Stand. A statue of George Best, Denis Law and Bobby Charlton is also opposite the Sir Matt Busby statue and the famous United trio are known as the club’s ‘Holy Trinity.’

Despite being the smallest stand in the stadium, the Sir Bobby Charlton stand is full of history and atmosphere. The stand is the only part of Old Trafford that still contains parts of the original infrastructure from 1910 and Football Ticket Pad can offer MUFC supporters the chance to experience the famous atmosphere first-hand with their very own official Manchester United football tickets. 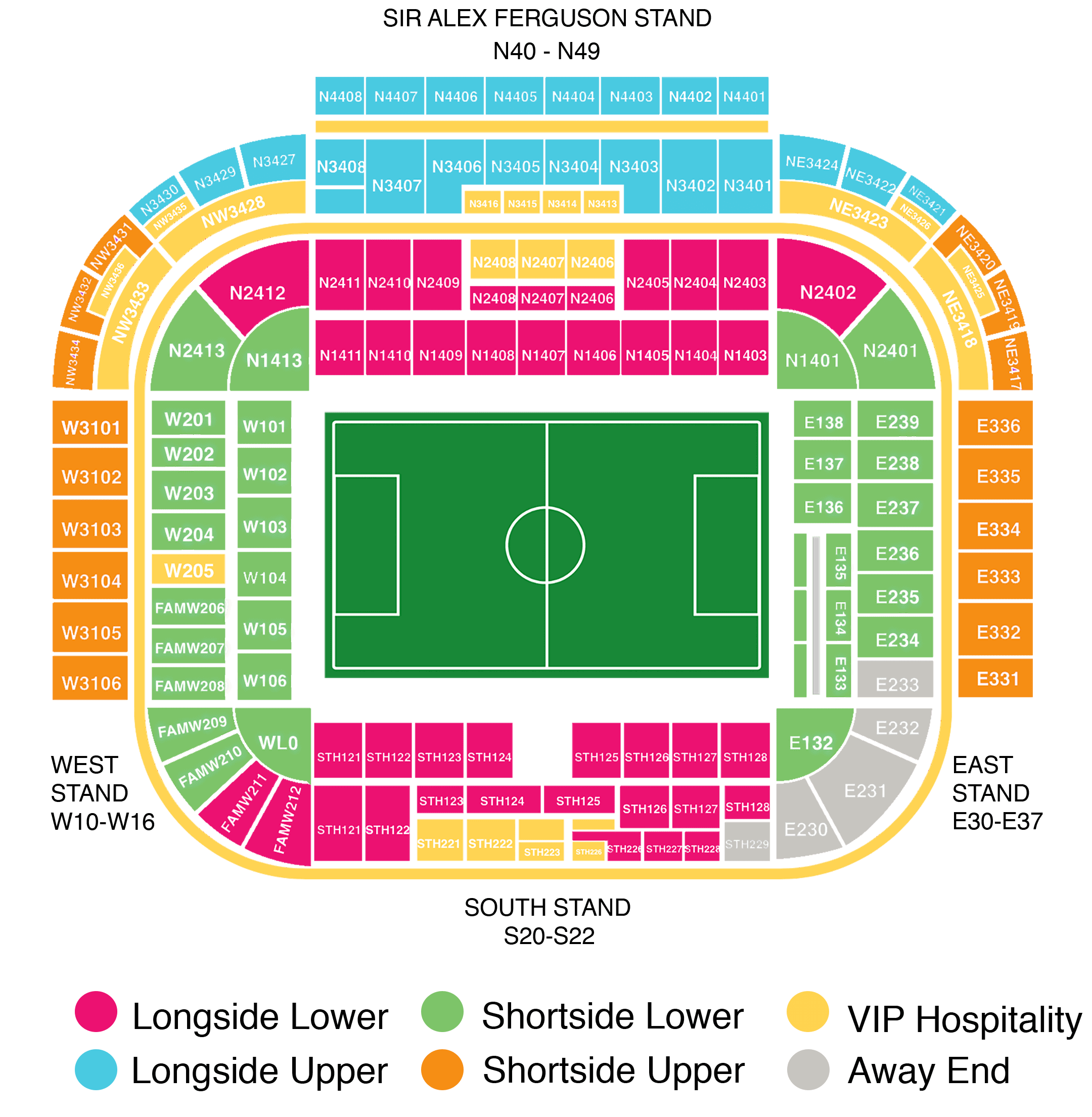 Season/Members Cards: These are reserved seats which are available for every single home match at Old Trafford. Football Ticket Pad customers will receive these their Season/Members Card before the game away from the stadium before returning them on the final whistle in a pre-paid envelope.

E-tickets: Manchester United tickets are only possible in the form paper tickets and season cards they do not carry any e-ticket option.

Paper tickets: This is the more traditional way of receiving your Manchester United tickets. Once your payment has been confirmed on Football Ticket Pad your tickets are then sent out by post to the address provided in your payment. Customers often receive their MUFC tickets 3-4 days prior to the match and they will be sent an email confirmation once their tickets have been dispatched to their provided address. MUFC ticket holders can then gain entry with their paper ticket at the turnstile and can keep the stub of their ticket as a memento of their trip.